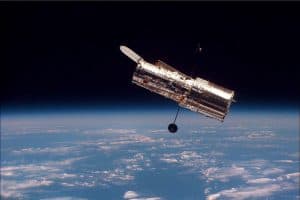 The Hubble Space Telescope, NASA’s first Great Observatory, launched in April of 1990 and has been going strong ever since. Astronomers from across the globe have utilized Hubble to make discoveries related to stars, galaxies, exoplanets, and the early Universe. To date, there have been over 10,000 scientific papers published using Hubble data, making it one of the most prolific astronomical endeavors in history. This talk will cover a brief history of the Hubble Space Telescope and explore some of Hubble’s most amazing and recent discoveries.

Registration is $15 per person.

Valerie Rapson is an Astronomer and public outreach enthusiast who enjoys teaching people of all ages about science. A native of Rochester, NY, she earned her Ph.D. in Astrophysical Sciences and Technology at RIT where her research focused on the chemical composition and structure of planet-forming disks around nearby young stars. Prior to joining the faculty at Oneonta, Dr. Rapson was the director of the Dudley Observatory in Albany, NY. She is a National Astronomy Ambassador and was awarded the 2018 Emerging Leader Award by Girls Inc. of the Greater Capital Region for being a role model to young women who aspire to become scientists.