In Defence of King George 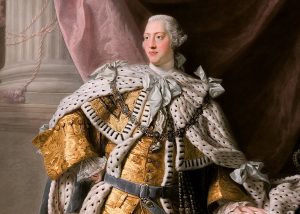 In the Declaration of Independence King George III was accused of a long list of transgressions. Did he really deserve such treatment? He was alleged to be a tyrant and unfit to be ruler of a free people. Really? The colonists were understandably angry at the laws and taxes imposed on them from London, but should their anger be laid at the door of King George? In Hamilton he was portrayed as a preening fop, but what was he really like? All shall be revealed in Defence of King George.

Sponsored by The Keelan Family Foundation

*IN PERSON ATTENDANCE IS NOW SOLD OUT – ZOOM IS STILL AVAILABLE*

*Please note this the rescheduled date for this talk (originally scheduled for July 12).

Derek Boothby has been involved in international political and security matters for over 40 years, both working for the United Nations and elsewhere.  In the UN he worked on arms control and arms limitations and was Director of the Europe Division in the Department of Political Affairs.  He was the Deputy Director for Operations in UN weapons inspection and destruction in Iraq, led a chemical weapon investigation in Azerbaijan and Armenia, was second-in-command of a UN military and civilian operation in the Balkans, and later Chairman of the UN’s Iraq Operational Group.