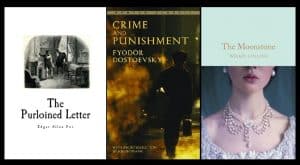 Lecture Two: Crime and Punishment
March 8
We then turn on March 8th to Fyodor Dostoevsky’s Crime and Punishment (1866), which shifts our attention from “whodunit” to “whydunit,” revealing the psychological and philosophical potential of the genre through detective Porfiry Petrovich.