‘Oumuamua: The Scout from Interstellar Space 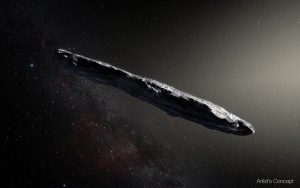 In 2017 our solar system was briefly visited by an object from interstellar space. Observatories around the Earth studied it intensely for the few days it remained detectable by modern instruments. The object was named ‘Oumuamua, which is Hawaiian for ‘scout’, and had unusual characteristics. While most astronomers have concluded that the interstellar object was likely made of rock and ices (e.g., asteroid; comet), a prominent astrophysicist at Harvard University, Professor Avi Loeb, has argued that the object may be an ancient spacecraft launched by another civilization in our Milky Way galaxy. The concept of space archaeology has emerged. This presentation will describe the observational data about this interstellar visitor known as ‘Oumuamua.

Registration is $15 per person.

John Delano earned his Ph.D. in geochemistry at Stony Brook University. Prior to retiring in late 2016, he held the rank of Distinguished Teaching Professor at the University at Albany, State University of New York, in the Department of Atmospheric and Environmental Sciences. He was an Associate Dean for the College of Arts and Sciences having 22 academic departments and 500 faculty, and he was the Associate Director of a NASA Astrobiology Institute at Rensselaer Polytechnic Institute. John was a member of many science advisory panels for both NASA and the National Science Foundation. His research was competitively funded by NASA for more than 30 years and yielded 70 publications in the professional scientific journals.