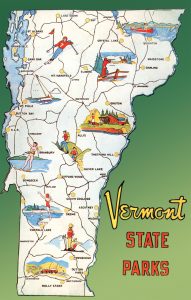 Parks & Recreation will examine the history and artistic depictions of Vermont’s state parks and other formally designated natural areas, such as the state forests, the Green Mountain National Forest, and the Long Trail which runs through it, and the role they’ve played in the helping to make year-round outdoor recreation – from skiing/snowboarding to hiking and fishing – an integral aspect of the state’s identity in the public imagination.

The presentation, which is based on the exhibition of the same name, on view at Bennington Museum through November 6, will trace the history of Vermont’s parks and other formally designated natural areas from the origins of nature tourism in the region in the mid-nineteenth century through the formal development of a state park system and national forest designation beginning in the 1920s through the 1940s, alongside the state’s concerted effort to draw tourists through coordinated marketing campaigns. A selection of works of art, including Sanford Gifford’s painting of hikers/campers on top of Mt. Mansfield from 1859 and Milton Avery paintings of the area that would become Jamaica State Park, 1935-1943, and contemporary paintings by regional artists will tie together the themes of the exhibition, from past to present, in visually compelling ways.

Jamie Franklin has been curator at the Bennington Museum since 2005. His scholarship has focused on American art of the early to mid-20th century, with a particular emphasis on the intersection of modernism and self-taught art. He has organized exhibitions and written books, essays and articles featuring artists and topics including Erastus Salisbury Field, Grassroots Art, Impressionism, Rockwell Kent, Anna Mary Robertson Grandma Moses, and Alice Neel. His 2014 exhibition Alice Neel/Erastus Salisbury Field: Painting the People was recognized by the Wall Street Journal as one of the most memorable exhibitions of the year and his 2016 exhibition Milton Avery’s Vermont was lauded as being “as close to a perfect show as mere mortals can mount.”