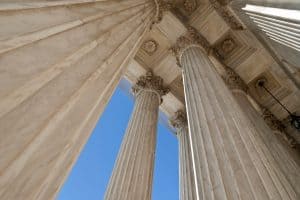 This talk will review the blockbuster past term at the Supreme Court. It will examine the Court’s major constitutional decisions on abortion, guns, religion, and others, and explore the Justices’ voting records and the decisional record of the Court as a whole. Prospects for the next term will also be looked at, including that of the newest appointee, Ketanji Brown Jackson.

Registration is $18 in advance.

Vincent Bonventre joined the Albany Law School faculty in 1990, where he is the Justice Robert H. Jackson Distinguished Professor of Law. He teaches, comments, and advises on courts, judges, and various areas of public law. He is the author of “New York Court Watcher,” a blog devoted to research and commentary on the U.S. Supreme Court and the New York Court of Appeals. He is also the founder and editor of State Constitutional Commentary, an annual publication of the Albany Law Review devoted to American state constitutional law, and he is the founder and director of the Center for Judicial Process.