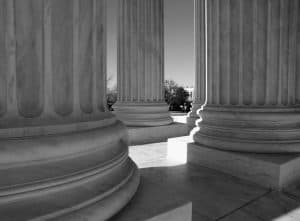 That is accurate in a narrow, technical, and formalistic sense. But as a general, practical, and realistic sense, it is quite misleading. This talk explores the tradition of state court decisions throughout the nation that rejects rulings of the federal Supreme Court in order to provide greater protection for constitutional rights and liberties, and which are then the supreme law in their respective state jurisdictions.

Registration is $18 in advance.

Vincent Bonventre joined the Albany Law School faculty in 1990, where he is the Justice Robert H. Jackson Distinguished Professor of Law. He teaches, comments, and advises on courts, judges, and various areas of public law. He is the author of “New York Court Watcher,” a blog devoted to research and commentary on the U.S. Supreme Court and the New York Court of Appeals. He is also the founder and editor of State Constitutional Commentary, an annual publication of the Albany Law Review devoted to American state constitutional law, and he is the founder and director of the Center for Judicial Process.