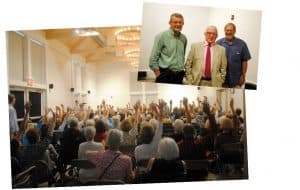 The motion before the meeting is that THE WEST HAS LOST IT.

Since perhaps the Peace of Westphalia in 1648, western ideas have gained ground and led the world. Ideas and values that included the recognition of state sovereignty, freedoms of expression and religion, and later the spread of liberal democracy and the market economy were widely exported, first by European expansion and later by the United States. But with the recent rise of different systems, particularly in China and India and developments in other regions, western dominance is now being challenged. Western leadership is no longer the global guiding star. Has the West lost it? Once more our two debaters will engage in oratorical combat and audience views will be invited.

Derek Boothby has been involved in international political and security matters for over 40 years, both working for the United Nations and elsewhere.  In the UN he worked on arms control and arms limitations and was Director of the Europe Division in the Department of Political Affairs.  He was the Deputy Director for Operations in UN weapons inspection and destruction in Iraq, led a chemical weapon investigation in Azerbaijan and Armenia, was second-in-command of a UN military and civilian operation in the Balkans, and later Chairman of the UN’s Iraq Operational Group.

Peter Radford is the publisher of The Radford Free Press, a blog on economics covering contemporary issues and the state of economic theory. More broadly, he is also a writer and consultant on economics and business theory. He is a cofounder and serves on the executive committee of the World Economics Association.

Steven Sinding was the director general of the International Planned Parenthood Federation in London. He had a 20-year career at the U.S. Agency for International Development and served as senior population advisor to the World Bank and later as director of the Population Sciences program at the Rockefeller Foundation. He was clinical professor of public health at Columbia University. Dr. Sinding serves on a number of boards and works as an international consultant.